The Effect of Drug Addiction on Sleep Patterns

The disturbances in sleep patterns among chronic drug addicts and substance abusers is a well-researched area of Medicine. It is a well-known fact that all psychiatric and drug abuse disorders are associated with disturbances in sleep patterns. The instability of sleep architecture in subjects involved with chronic drug addiction is primarily due to psychiatric and physical illnesses affecting their overall health. The reciprocal relationship between the cause and effect of drug addiction and sleep disorders is a vicious circle, in which drug abuse aggravates sleep disorders and also vice versa.

Sleep pattern disruption in alcohol-dependent subjects is a widely acknowledged medical observation. Alcohol and other psychoactive drugs (such as opiates) interfere with the release of neurotransmitters such as serotonin and norepinephrine in the brain, which are vital for normal regulation of sleep patterns. During the early stages of addiction, alcohol itself would initially work as a sedative to aid sleep. However, persistent alcohol consumption (or abuse) would alter the Rapid Eye Movement (REM) stages of sleep and create severe disruptions in sleep patterns. The alcohol disrupts the release of brain neurotransmitters and results in the alcoholic subject suffering from perpetual insomnia.

‘Sleep Apnea’ is another condition associated with Alcohol abuse where the narrowing of upper respiratory canals occurs, which would cause the addict to awaken abruptly, gasping for breath. The detrimental effects of such substances on sleep cycles can persist even after drug withdrawal, detoxification, and abstinence. 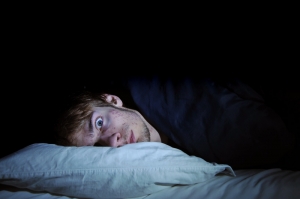 in the brain, thus increasing the periods of wakefulness. Cocaine-addicts have reduced Slow Wave Sleep (SWS) and REM stages in their respective sleep patterns. Paradoxically, once the effects of the drug wear off, a state of ‘sleepful-ness’ often occurs and the addicts consume even more cocaine to stay awake. These effects are similar to amphetamine addiction on sleep patterns.

Effects of Cannabis on sleep patterns

Two main constituents of Cannabis – 9-tetrahydrocannabinol and cannabidiol, have contrasting effects on sleep patterns – where the former has a residual sedative effect and the latter has a weak activating effect via the brain’s hypothalamus and dorsal raphe nucleus. Similarly, prolonged marijuana addiction has been shown to disrupt the major stages of sleep, particularly the lesser slow wave sleep, shorter REM latency, poor sleep efficiency, longer sleep onset times, and lower overall sleep times.